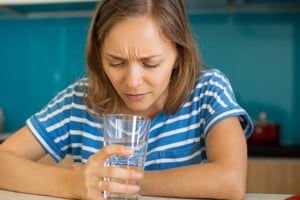 Most homeowners don’t think much about their water until they notice something out of the ordinary. While it can be easy to dismiss unusual odors, it’s important to remember that bad-smelling water is a telltale sign that there’s a problem in your water supply. Strange odors don’t usually go away on their own, and left untended, you might even grow accustomed to the smell and not realize that it’s getting worse. It’s best not to take chances when your tap water smells bad.

Why Does My Water Smell?

There are a number of things that can cause your water to smell, and each scent can usually be traced back to a specific culprit. Here are some of the most common signs that you need to take a closer look at your water quality.

Deposits of zinc, iron, and manganese can leach into water sources over time, but they are usually naturally occurring and aren’t much cause for concern. In other cases, metal particulates from the interior of water pipes can break away and build up in the plumbing system, usually gathering in the water heater. If your water takes on a metallic taste or odor, the first step is usually flushing (or replacing) the water heater to clear away the detritus. However, a metallic odor could also be an indication that there is lead in the water supply, which is a cause for serious concern and should be addressed immediately before it can cause further health problems.

When water smells like raw sewage, mold, or even decaying fish, the most likely culprit is usually bacteria building up due to decaying matter in your pipes. A variety of nasty things can grow in the dark recesses of dirty plumbing, including algae, fungi, and a range of bacteria, to create a musty water smell. While hydrogen sulfide is the most common culprit (see #3), it’s best not to take any chances when it comes to bacteria in the water. Disinfecting your water system with a shock chlorination treatment will typically kill off any unwanted nasties lining your pipes.

Hydrogen sulfide gas has a distinctive odor that smells like rotten eggs. When waterborne, anaerobic bacteria feed on sulfate-rich organic matter that builds up in your drains and pipes (such as hair, soap, or leftover food), they produce hydrogen sulfide as a waste product. Although this sulfury water may smell terrible, it’s usually not harmful unless someone in your home has an allergic reaction to it. Over time, however, the bacteria can build up and cause corrosive damage to your pipes. Ordinary household cleaners and water softeners won’t usually do much to address the problem, but there are a number of water filtration and treatment products that can remove the bacteria.

Many public water utilities use chlorine to combat bacterial growth (see #2). In fact, nearly 98% of US water treatment systems use it to disinfect the water supply. Sometimes, however, high concentrations of chlorine can build up and lead to unpleasant side effects. While it’s safe to drink water with chlorine levels below four milligrams per liter, showering in chlorine-heavy water can dry out your hair and skin. Water filters are usually effective at screening out excess chlorine, but if the odor persists, it’s a good idea to have your water tested.

While this odor is rarer than the others listed here, it could indicate a number of serious problems. There are generally three sources of fuel-like odors:

Any one of these possibilities could lead to severe health issues, including cancer, liver damage, or kidney problems. If you detect fuel-odors in your water (whether you’re on the public water supply or a private well), you should contact the local health department immediately.

When your water smells bad, don’t ignore the warning signs and wait for the problem to go away. The best step is to test the water quality or contact an experienced plumbing professional to diagnose the problem and take the appropriate action. While foul-smelling water may not always indicate a danger to your health, there’s not much sense in taking that risk.