It all started in 1971 in London, England when a man named Eric Wood had a leaky pipe under his garage. To eliminate the need to dig up his entire garage floor to repair the pipe, Wood invented a cured-in-place pipe lining (CIPP) renovation method. He named the process insit u form, which derives from the Latin meaning “form in place.” On January 29, 1975, Wood applied for patent number 4009063, with the patent for cured-in-place pipe lining granted on February 22, 1977.  Insituform Technologies commercialized the patent, and brought the technology to the United States shortly thereafter. Since it’s inception in 1971, it is estimated that 50,000 km of cured-in-place pipe lining has been installed worldwide!

Cured-In-Place Pipe Lining Is Used In Many Ways

Cured-in-place pipe lining is championed by the trenchless technology community because of its advantages. Cured-in-place lining does not need excavation to rehabilitate a leaking or structurally unsound pipeline. An excavation may be made depending upon certain design considerations, but often, the liner can be installed through an existing access point or manhole. 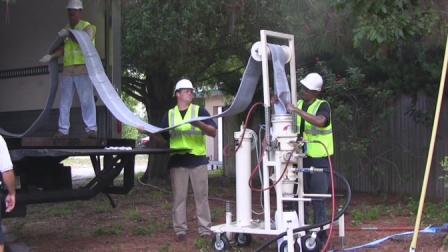 When cured-in-place pipe lining was first created, the process involved pulling an enlarged polyester felt liner into place at an ambient temperature. Eventually, the CIPP technique developed into a heat curing and water inversion process. The cured–in-place pipe lining technique now involves the utilization of thermostat resin. This requires a bag typically compiled of felt and an initiator system that needs ultraviolet light or heat for to work.  Currently in North America, more than 95 percent of cured-in place liners need heat for system activation. The ultraviolet light process, however, is relatively new to North America. This UV light process can offer better quality control and performance in general.

What's To Come For CIPP Lining?