No one likes costly repairs, but sometimes they are necessary—especially when it comes to your sewer lines. It’s terrible, it’s smelly, and worst of all, it usually requires digging. It’s even worse when it happens to the public sewer lines. Imagine a burst at the busiest intersection in town—talk about a rush hour that stinks! Luckily, with manhole-to-manhole trenchless sewer repair there’s no longer a need to dig or to reroute traffic. You can get that rush hour back to smelling like roses (or at least as close to roses as a roadway’s going to get) by lining your pipes using our techniques.

To line a sewer using our trenchless technology, it’s pretty simple. Instead of digging in and replacing the entire section of sewer system, we close off the section of sewer that we’re repairing, bypass the sewage back into the sewer at a point further down (which makes sure the service is uninterrupted), and get to work. We go into the sewer, after it's empty, and invert a liner filled with resin into the drain from one end to the other.

After that, we circulate hot water or steam into this resin which, after reaching a certain temperature, begins the curing process. It will set into place relatively quickly (around 2 to 4 hours), after which we would then finish the process and open the sewer back up. The liner is rated for 50 years, which is a long interval considering that none of the pipe is replaced. 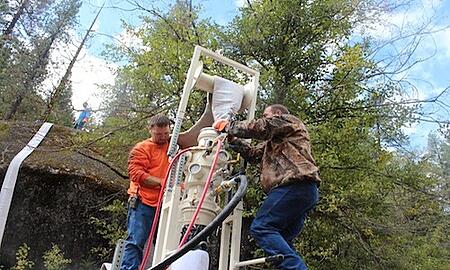 What Is The Alternative?

If you were to go with full pipe replacement, you’re looking at a large project (including ripping up the road and/or public land to get at the sewer). You’ll have to excavate it, put a new sewer (or pipes) in, and then replace everything you dug up—a far longer and costlier prospect than it seems on the face.

Even if the dollar amount is lower, imagine the disruption it would cause a town. A good cost-benefit analysis would show that the disruption (destruction of a park, for instance, or rerouting traffic) might outweigh any other considerations. Not to mention the longer disruption of services that would be required to take on such a project. You might be able to ask your residents not to use their water for four hours, but what about days? Weeks?

Is There A Reason Not To?

There is always a reason not to. Everything has its pros and cons. However, with the convenience stated above and the simplicity of the procedure, the only way manhole-to-manhole trenchless sewer repair wouldn’t be worth it is if you could either isolate the exact problem and fix it without digging or lining or if the sewer is both close to the earth and far enough from any public areas that need preservation. However, those are some slim pickings when it comes to finding an area that fits those descriptions. If you’re going from manhole to manhole, digging will disrupt something—why do that to your townsfolk?

Manhole-to-manhole trenchless sewer repair is the way to go in most cases. It’s more cost effective, lasts longer, and creates a 50 year seal in the sewer drain. Odd cases aside where the sewer is both shallow and remote, the procedure creates good conditions around the worksite rather than destroying your hard work in keeping the city both clean and orderly. There are no mounds of dirt to put back or repaving a road—which is an expensive procedure! Make the right choice for your town or city: go trenchless. Sewer repair has never been simpler for you or your townsfolk. Call a professional today for your free quote!