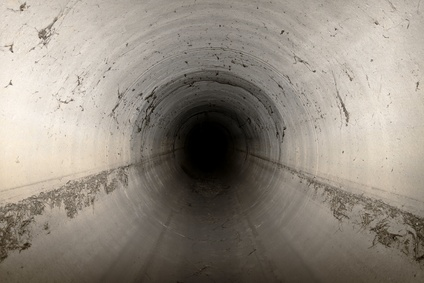 When you're having major issues with your sewer lines (perhaps not even for the first time), there's always that little urge at the back of your head to replace the pipes. They've given you enough issues and pains, and they're not worth fixing anymore, right?

Wrong. Your sewer pipes serve more than one purpose, and simply replacing them is an overblown and, to be frank, overzealous option that creates more problems than it solves.

Do you take good care of your lawn? Seed it with the right grass, fertilize, water, and so forth? You can count that work as null and void, as the trenches you'll need to dig to replace the sewer line is going to rip all of that up. Are there trees by the sewer line? They'll have to go, too. All of the improvements you've made on top of the line will need to be moved or torn down.

There is an alternative, however. Instead of digging up the lateral lines from your home to the public system, lining creates a barrier inside of the pipes that allows for flow to continue through the pipes even though the pipes themselves are compromised.

The pipes do two important jobs. They transport sewage out of your home to the public system, meaning that you won't have to have it in your home. (The alternative, of course, is chamberpots—a poor option, to say the least). But they also hold the shape so that the flow doesn't slow down. That's the other function, and the one that lateral lining relies on.

Using the shape of the pipe, the liner expands in the pipe to ensure that it holds the same shape in the pipe. This means that your "broken" pipe is serving two funtions: a mold for the liner and a guide to pull it into place. That's pretty amazing for something that was "broken."

Not to mention that after the liner's in the pipe, the pipe won't be broken anymore. The liner does not reduce flow significantly, as well as repairing the laterals. If the break is at the main, the liner can still be used and we can reinstate service to the mains. That's pretty amazing!

Another great benefit is that we don't have to dig trenches. Instead of ripping out your nice lawn and all the improvements we mentioned before, we dig at maximum two holes—enough to get into the pipe to set the liner. No long trenches and no excavation trucks. It's a shorter process, too, and we know that time is money.

Plus, thanks to the fact that we're burning less fuel, using less equipment, and destroying less of nature, it's a greener technology than the alternative. That means that you can remain concerned about the environment as well as with your wallet.

Speaking of your wallet, the best benefit is to your finances. The procedure takes less time to perform, which means less time waiting around for us to work and less time at home while we do it. Usually it's done in a day, which means lower labor costs, and you can be back to work sooner. Those are great benefits, and ones that you should take advantage of!

If you're interested in our services, you should give us a call. We're here for you and are willing to help in any way that we can. We've been doing this for a long time and we know how to make your sewer laterals like new again. Don't let your leaky lines cause problems—call us instead!