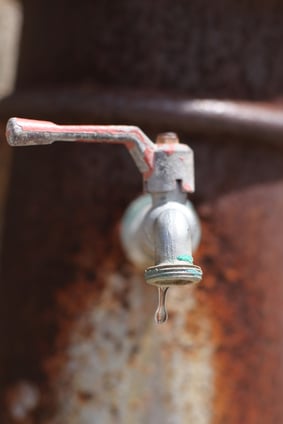 In our modern times, water pressure is something we often take for granted. But, when we turn on a faucet only to find that water is trickling down, instead of being forced down, we start to miss the almost universal standard of significant water pressure.

Before we can get a grasp on what exactly we're missing though, we have to know exactly what it is, right? So, what is water pressure? Well, basically, it's just potential energy. Generally speaking, the closer you live to the municipal water supply, the stronger your potential energy is going to be. However, if you're using a well system or you live on a high hill, for example, your water pressure will likely be a bit lower. If you have an old faucet or old pipes, and you happen to live relatively close to a municipal water supply, you're simply wasting your opportunity for powerful water pressure.

Obviously, potential energy isn't the complete story on water pressure - it's just the beginning. There could be countless reasons why your water isn't shoot onto your hands or onto a dirty plate, with the force you'd like it to.

If you want to keep your water pressure out of your faucets or if you've experienced a sudden drop in water pressure, the City might be able to help. Have them come check things out and see what's going on. Again, if you live in an area close to the municipal water supply, there's a good chance that something within your own plumbing system has gone awry.

2. Routine Inspections On Your Pipes

Galvanized steel pipes deteriorate over time, and often become clogged. This obviously allows less water to flow through the pipes, ultimately decrease the water pressure that comes out of your faucet. Sometimes your faucet isn't getting the water pressure it once did, due to a leaking pipe. When a pipe has a leak in it, the energy with which the water is flowing through the pipe is reduced. Simple physics states that water running through a pipe with only one outlet will be more pressurized than if it has another second outlet (small as it may be) to relieve the pressure. During their routine inspection of your pipes, your plumber will undoubtedly recognize any leaks present.

3. Replace Your Pipes With Copper or Plastic

Where galvanized steel pipes corrode, copper and plastic pipes don't (at least not as fast or as easily). Instead of having your plumber replace your old galvanized steel pipes with new galvanized steel pipes (which will just corrode in a handful of years, anyway), ask if they can replace them with their copper or plastic counterparts. If you have a choice, plastic might be the best way to go. Although it doesn't look as pretty as copper, its more cost effective and also takes a particularly long time breakdown. While steel pipes will only give you about 35 good years, copper can offer at least 50. It is thought though that plastic pipes can last more than 100 years, but unfortunately these kinds of pipes haven't been around long enough to justify that claim. Nevertheless, out of all the residential piping materials, plastic is by far the best, in terms of its lifespan.

If you happen to live way up in the mountains, or in the middle of nowhere, chances are, your water pressure is always going to be pretty low - unless, of course, you opt for a water pressure booster pump. We know what you're thinking - expensive, right? Not really. You can actually purchase one for under $350, and it'll supply substantial water pressure throughout your home. While this is a super effective method, and while it won't empty your wallet, it might hike up your electric bill substantially. Where dollars might come into play again though, is on the installation of the device. If you've got some handy skills, you're welcome to give the installation a try yourself, but chances are, you're going to need to hire a plumber for the installation job.

If you already have a water pressure booster and you're still experiencing pressure issues, your solution might be as simple as adjusting a switch. To raise the system pressure, shut off the pump's power and remove the cap on top of the pressure switch. Here you will see two posts, a short one and a tall one, with a nut around each. Don't touch the short one. To increase water pressure, turn the plastic nut on the tall post, clockwise. Every turn will increase the water's pressure by about 2 lb. When you've gotten the water pressure to exactly where you want it, put the cap back on, and you're all set.

5. Clean The Tip of Your Faucet

Also called the aerator, this is the part of the faucet at which the water comes out. If you happen to be experiencing particularly low water pressure, or you want to ward of chances of this happening in the future, the practice employed by you, might be as simple as cleaning the aerator. Just unscrew it (to the left, of course), give it a good scrub with a bathroom cleaner. The aerator has lots of tiny holes in, and it's not uncommon for gunk to get lodged in those holes over time. And, because nobody really thinks of cleaning the aerator all that often, when one does decide to clean it, gunk build up in the holes can be quite significant.

6. Use Your Faucets Less Frequently

The Benefits of Cleaning Your Drains

5 Reasons Your Dishwasher May Be Clogged & How To Fix It