Old houses are vulnerable to an array of problems, including ungrounded outlets, outdated cooling and heating systems, and, one of the most insidious problems, plumbing issues. 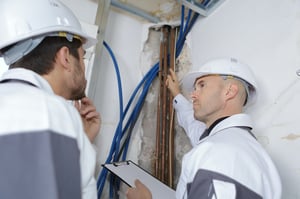 A lot of plumbing problems in old houses are silent. You may not notice hidden leaks until your water bill is through the roof or you start sensing property damages, like visible stains on walls or musty odors.

Whether you’re considering buying an old house or if your current residence is getting up there in age, you need to consider a plumbing inspection.

The Plumbing Inspection: What to Expect

Professional plumbing inspections cover all the bases. From checking pipes under the house and water heating testing to finding leaks in hydrants, you can expect a comprehensive check for older home plumbing issues.

Simply put, a professional plumbing inspector will check wherever water runs in your house. The most important thing to remember about plumbing inspections is that they’re meant to be preventative.

Water can cause the most damage in old houses. In face, the cost of repairing and cleaning up water damage ranges from $1,144 to $4,693, with the average national cost being $2,881.

Plumbing inspections are excellent for getting ahead of major costly issues that are common with old plumbing systems. The most common plumbing problems in old homes include the following:

The best way to prevent older home plumbing problems is to get the house inspected.

4 Reasons Why You Should Inspect Old House Plumbing

Aside from taking proactive steps in preventing the aforementioned common problems, there are many reasons you need to get your old house plumbing inspected.

It’s hard to not fall for the charm of an older home. However, before making one of your biggest investments of your life, you want to take the right measures to prevent getting stuck in a money pit.

Not only is this a great investment for you personally, but it could also be required by your homeowners insurance. Typically, if your house is over 25 years old and it hasn’t been inspected recently, insurers may require a full home inspection as part of the qualification process for a standard policy.

The appraisal process includes creating a comprehensive report that consists of the home’s location, its condition, and the value of it as compared to others in the area. It’s wise to set up an inspection on your own while your lender sets up the appraisal.

Simply put, a full inspection gives you peace of mind and confidence in purchasing an old house, giving you a better understanding of the condition of the old plumbing pipes and the rest of the systems.

Over time, you might see your water pressure decrease. This can be caused by several factors, including the build up of minerals and other deposits.

In fact, the minerals and the pipe materials can cause a chemical reaction that leads to bacteria build up, which can be a health concern for occupants.

Other causes of water flow restrictions in old house plumbing systems include:

When you notice restricted water flow, act fast and seek plumbing inspections. The faster you act, the less damage your property will incur.

You May Have Toxic Materials in Your Plumbing

An unfortunate truth about plumbing systems in houses built before the 1990s is that a lot of the materials in the pipes are considered potential health risks.

Three of the worst types of piping that may be in your old house include:

Your Sewer Lines Can Deteriorate

The sewer lines in old houses are vulnerable to deterioration that can greatly affect the lifespan of the pipe. Some of the most common sewer lines installed in older homes include the following:

Primarily installed in the 1950s and 1970s, these pipes are prone to failures and leaks at the joints. The average lifespan of these pipes is about 70 years.

Homes built before the 1950s may have clay pipes. These typically last 50 to 60 years. However, they’re fairly uncommon.

Installed between the 1950s and 1970s, these are common in residential areas. Their lifespan ranges from 70 to 100 years.

Orangeburg sewer pipes were used for a long period of time, from as early as 1860 to as late as 1972. Unfortunately, their lifespan is short; they start to deform after 30 years and likely fail by the 50 year mark.

As noted, these are incredibly dangerous. Despite their 100 year lifespan, homeowners with lead pipes are at a high risk for leaching lead into their water supply.

These last 100 years, and they’ve been used since the 1940s. Fortunately, if your old house from the 40s has these in its system, you don’t have to worry about complete failure until 2040. Although, it’s a good idea to conduct inspections to ensure your pipes are properly cared for.

No matter your situation, if you’re living in an old house or contemplating purchasing one, you need to seek an inspection. Your inspection won’t just save you money. It can save you and your family from potential health problems and give you peace of mind knowing that you’re safe in your own home.