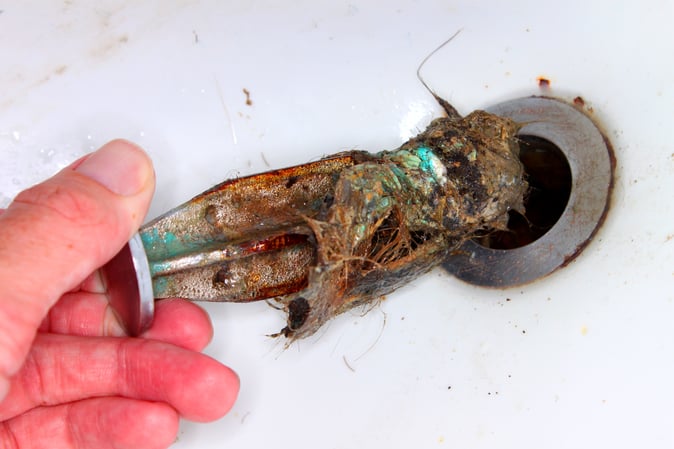 Every day, plumbers respond to calls to clear out clogged drains. Most of the time, the blockage is the result of the simple accumulation of waste and is easily unclogged. In other cases, the blockage is caused by objects lodged in the drain lines. Sanitary products, small toys, plastic caps, and even jewelry find their way down the drain quite frequently and don’t draw too much special attention when they’re removed.

Sometimes, though, removing blockages can result in some unusual, or even downright weird, finds. Here are a few examples ranging from reasonably common discoveries to the truly strange.

While this one might sound odd, false teeth are among the most “common” unusual objects found lodged in drains. Whether dropped into the toilet, lost down the bathtub drain, or forgotten in the sink, plumbers pull hundreds of sets from pipes every year. The UK’s Severn Trent Water Company found so many dentures and false teeth in 2011 that they launched an internet campaign to return lost sets to their owners. No word on how many people took them up on the offer…

People use and drop their cell phones everywhere these days—including the bathroom, apparently! While plumbers commonly receive calls to retrieve phones accidentally flushed or lost down the drain, some cases are truly bizarre. A plumber working at a Texas airport once found a brand new iPhone 5, still in the shrink-wrapped box, blocking a pipe in the women’s bathroom. Unfortunately for him, airport policy required him to deliver it to the lost and found.

While every plumber has probably had the unfortunate experience of pulling clumps of hair from a drain, few of them would expect to find a twelve-foot long mass of hair like the one plumbers removed from a line in Spokane, Washington. Not to be outdone, another Spokane plumber removed a shorter, but thicker tangle from a nearby house just a day later.

A team of plumbers in Scotland received quite a surprise when a routine drain cleaning produced a badger. How the foul-tempered critter wound up wedged in the pipes was a mystery, but small animals frequently become lodged in drains. Plumbers have reported finding dead rats in plumbing lines or even squirrels that crawled down roof ventilation stacks. Usually, the poor creatures don’t survive long enough to be rescued, but the Scottish badger was lucky enough to make a full recovery.

For many children (and perhaps a few adults), the toilet is a magical device that can make small objects “disappear’. It’s only after the drain backs up, the bathroom floods, and a plumber pulls out a handful of slimy toys that kids understand what goes on in the plumbing after they turn the handle. Still, you have to wonder what went through the head of the child who crammed a stuffed Winnie the Pooh doll down the drain. Scotland plumbers pulled the “bear of very little brain” from a blocked sewer line, which helped prompt Scottish Water’s awareness campaign to reduce the country’s 40,000 blockages each year.

A 2009 YouTube video of an unidentified fleshy mass found in a Raleigh, NC sewer tunnel sparked widespread speculation that aliens had finally come to live among us (or beneath us). Local biologists quickly solved the mystery, however, identifying the oddity as a colony of tubifex worms. While the mass presented no danger to the pipes and wasn’t even removed by the water department, it still stands out as one of the weirdest sewer discoveries.

For sheer scale, nothing found in a sewage line can top London’s infamous “Fatberg”. A rock-solid mass comprised of hardened cooking oil and sanitary products, the “Fatberg” weighed in at 130 tons—about the scale of a blue whale.. It took an eight person crew working seven days a week to remove the blockage, hauling off 20-30 tons each day. The discovery unsurprisingly led to a “Bin it—don’t block it” campaign encouraging Londoners to properly dispose of their used cooking oil and sanitary wipes. Remember, just because a wipe claims to be “flushable” doesn’t mean it won’t cause damage to your pipes.

Believe it or not, discovering unexploded artillery in sewage lines is not as rare as one might think (or hope). Mortar shells have been discovered in drains across the world, including the United States (Nashville), the UK (Blackpool), and India (Jammu). Fortunately, the explosives were safely disarmed in each case.

No, not a toy car, a real car. Or at least half of one. A widespread sweep to clear out blockages in London’s sewer lines in 2014 found one line clogged up by half a Mini automobile. Thames Water removed the vehicle, which no doubt resulted in quite a few confused looks from passersby. No one offered theories on what happened to the other half of the car.

If you’re experiencing a blockage in your pipelines, hopefully it won’t result in a headline like some of the finds listed here. But you can take active measures every day to keep your drains free and clear of obstructions. When your drain does get backed up, however, be sure to call an experienced plumbing service that knows how to clear them without causing damage to your pipes.

How to Clean Gutters and Clogged Roof Drains

How a Toilet Works and Toilet Tank Parts to Know