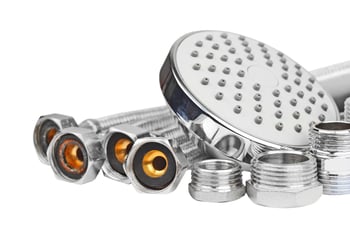 Whether you're replacing old, outdated plumbing fixtures with low-flow, low-consumption alternatives or remodelling your entire bathroom, you're probably going to replace your shower head at one point. As part of our series on updating bathrooms and installing new fixtures, we go through installing new shower heads step-by-step in this blog article.

Naturally, you’ve got to cover the preliminary steps before you can go about successfully installing a new shower head. Don’t skip the prep. stage. To effectively replace an existing shower head or install a new fixture (such as high-efficiency, WaterSense-labeled shower head), make sure you have a set of slip-joint pliers, adjustable wrenches and thread seal/PTFE tape on deck.

Before removing your old shower head parts, consider placing a cushion or layer of towels down to protect your tile or tub if tools are dropped. Additionally, block your shower’s drain with a cloth or cover, so no bolts or parts can fall through. With your shower protected from accidental damage or part loss, make final preparations by shutting off the water supply to your shower.

Now that you’ve got the tools for the job ready and have fully prepared, you can get to actually replacing your old shower head and installing a new one.

If you’re removing an existing shower head, the first thing you should do is try to remove the shower head by hand. Rotate the shower head counter-clockwise and see if it disconnects from the shower arm; if this doesn’t work, bring out your set of pliers and an adjustable wrench.

Wrap a cloth around your shower arm or tape around the pliers, and hold the shower arm with in place with the pliers. The tape/cloth serve to protect your arm finish, so don’t skip this step! Now, use your adjustable wrench to unscrew the shower head by force, in the same counter-clockwise motion you tried by hand.

With the existing shower head removed, wrap the shower arm threads with several layers of PTFE tape and firmly press the tape into the threading. This tape acts as a water-tight seal between your shower arm and new shower head, and should be replaced whenever you notice a leak during normal use.

If you’re equipping your shower with a new fixed-mount shower head, congratulations! You’ve picked the easiest shower head type to install - this step is essentially a reverse of Step 1. Simply screw the new shower head onto the shower arm with an adjustable wrench, and tighten by hand to create the best seal.

Reconnect your water supply and turn on the shower to test for leaks around the seal. If you detect any leakage, applying additional PTFE tape can resolve the issue quickly.

Installing handheld shower heads requires an additional step or two than installing comparable fixed-mount models; however, it’s still an easy process and you should have no problem installing the new unit on your own.

Combination shower head models, which have a fixed-mount base and separate handheld shower head, are actually much easier to install than you might think.

That’s it! Installing a shower head is one of the easiest DIY plumbing tasks a homeowner can do to improve the quality of their plumbing, and even reduce overall water consumption if WaterSense models are used.