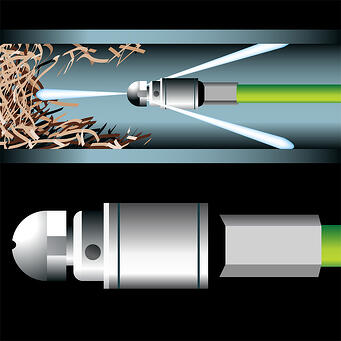 When it comes to cleaning out sewer lines, there are a couple different methods that can be implemented. Either you can stick an object in the pipes and dislodge the obstructions that way, or you can utilize pressure. While both of them have their pros and cons, in the end, we think that pressure is the way to go.

The pressure method we're referring to here is hydro jetting. Hydro jetting is basically the method of using a high-pressure stream of water through a pipe or a sewer line to unclog the blockage. The psi level of hydro jetting systems can range anywhere from 3,000 to 8,000 (some systems have an output that's even higher, while some are less powerful than 3,000), and the one appropriate for your needs, will depend on the type of piping system you have, and the severity of the blockage. If you have an extremely blocked municipal sewer system whose pipes are of a large diameter, for instance, you're going to need some heavy duty psi to adequately take care of the blockage. If you simply need a residential kitchen sink unclogged, and all of the other methods simply won't work, a lower pressure hydro jetting procedure will likely do the trick.

While traditional methods are often sufficient for a great number of unclogging jobs, they will never match everything that hydro jetting can do. That is to say that the nature of snaking or rooting can never FULLY clean a pipe. With these standard techniques, even when the line is, for all practical purposes, unclogged, there's lots of residue often left on the side of the pipe. Why does this matter? When there's residue on the side of the pipe, other residue is often more prone to sticking to it; so the accumulation begins again. Hydro jetting cleans a line to an extremely thorough extent leaving virtually no residue behind. This allows for a steadier, more continuous flow of liquid, which means that a build up in the future is less likely to occur.

One of the only downsides to hydro jetting is that it can be a bit more expensive than its traditional counterpart. On the other hand, the standard snaking / rooter techniques, because they're less efficient, take much longer to do. If the plumbing company you're looking into happens to charge by the hour, these fees can rack up quickly. Hydro jetting procedures can often be done in a fraction of the time, so in the end, the cost might end up being a toss up. In fact, hydro jetting just might actually turn out to be more cost effective.

Hydro jetting is an extremely versatile procedure, and in theory, it can be utilized for both municipal and residential needs. To the contrary, snaking methods are often not very efficient when used in large municipal projects. Again, the ultimate versatility of hydro jetting, really all depends on the particular system being used by the plumbing company in question. Sometimes a plumbing company will not have the adequate psi, or modern enough technology to address a very major blockage in a municipal sewer system. Other times, plumbers will have equipment that might be too powerful for a small residential job. You can trust most plumbers to honestly tell you whether or not the power of their system will pose a threat to your pipes.

So, which procedure is more sanitary? On the face of it, it might not be so clear to you, but the answer is actually hydro jetting. Because hydro jetting is always more efficient than traditional techniques, there's less of a health risk involved. The quicker the job can get done, the less exposed plumbers and others in the surrounding the area, will be to possible contaminants. Apart from being quicker and more efficient, plumbers are never dealing with sewage directly; where as plumbers implementing traditional techniques sometimes have to get their hands dirty to dislodge the sewer line.

You may think that hydro jetting is a huge waste of water, which wouldn't be the very best thing from an environmental standpoint. When you think about it though, this isn't a "waste" of water at all, it's being utilized for a very vital purpose, and in this case, using it is a necessity. For those living near a lake, a pond, or a river, it's the perfect procedure for you. On top of this, there are no harsh chemicals involved in hydro jetting - sheer water pressure is all that's needed to get the job done properly. Some traditional methods are bad for the environment, as they make use of harmful chemicals. Apart from that though, as we mentioned above, standard techniques can be harmful to environment in terms of the fact that potentially harmful elements already underground, are sometimes being brought to the surface - harmful bacteria / asbestos.

Many plumbing companies that employ traditional rooter / snaking techniques have high-tech cameras to help them see into the pipe and guide their work. The question is, why do these companies use a state-of-the-art piece of technology to help them look at the work they're doing, when the very tool they're using to do the work, is anything but contemporary. This should be puzzling to a lot of people. Plumbing companies that utilize state-of-the-art technology in all facets of their work, will likely deliver a much better finished product.

Once the hydro jetting process is completed, it's definitely recommended that the plumber conduct a hydrostatic test to see if the procedure has left you with any leaks or breaks - a test that isn't employed by companies utilizing traditional techniques. One of the great things about hydro jetting, as opposed to using a traditional snaking technique, is that hydro jetting is much less likely to leave your pipes with any such imperfections. When the traditional technique is used, there's a lot of scraping against the sides of the pipe / sewer line, which isn't the best for the structural integrity of the pipe. Although mild rubbing against a new pipe might not do any harm whatsoever, this scraping might have very negative implications on a pipe that's maybe seen better days.

Maybe you don't currently have a blockage in your line, but you just want to regularly prevent future blockages. Good for you. If you're looking to do this, hydro jetting is definitely the appropriate procedure. Again, hydro jetting is able to actually clean your pipes as well as unclog them; where as traditional techniques simply unclog them. So, for a regular cleaning to stave off clogs-yet-be, we highly recommend high power water pressure, as opposed to its standard counterparts.