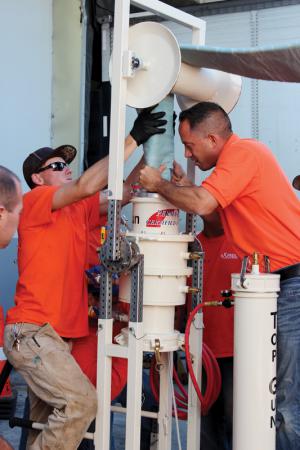 Back in 2005, work began on a major change to the City of Sacramento’s water systems. The goal of this undertaking was to install water meters on more than 80% of Sacramento’s service connections by 2025 to meet compliance with a State mandate.

However, during this project, city workers ran into some issues.

One issue is the prolonged drought that struck California which increased the urgency of the project. As stated on the City of Sacramento’s own website about the project, “in response to current drought conditions, the City moved the state mandate deadline for meter installation from 2025 to 2020.”

The Trouble with Trenching Thousands of Homes and Businesses

Another issue was the City’s aging water utility infrastructure. For many of the meter installations the city needed to perform, the pipes leading to the service connection were old, decayed, and in dire need of replacement. In some cases, these pipes could run under driveways, sidewalks, and other obstructions rather than under landscape areas.

Repairing/replacing pipes with traditional trenching is very difficult and expensive when pipes run deep or under solid obstacles. Plus, the process of tearing up thousands of taxpayer’s lawns, driveways, and sidewalks to repair damaged pipes and install new meters can be incredibly disruptive.

Is There a Better Way to Deal with Underground Utility Pipes?

There are alternatives to ripping up thousands of meters of streets, sidewalks, driveways, and landscaping to replace or repair aging pipelines for the city’s overhaul of its water systems.

For example, there are trenchless sewer repair technologies such as:

These technologies can allow municipalities such as the City of Sacramento to complete major repairs to their water system infrastructure while minimizing the impact to businesses and citizens.

Will Sacramento Embrace Trenchless to Update its Aging Infrastructure?

Given the advantages of using trenchless sewer repair technology, it’s very likely that the city will employ it numerous times during the ongoing update of the city’s infrastructure.

However, while the city may embrace trenchless technology for some applications, it’s unlikely to completely replace traditional trenching techniques for this update. Why?

One reason is that trenchless sewer repair technologies, for the most part, are dependent on existing pipes for their operation. The city’s goals call for reworking pipelines and relocating “backyard water main pipelines to the street.” This requires trenching and installation for entirely new pipe paths and connections.

Even pipe bursting, which destroys old pipe and replaces it with new pipe, can only follow the path of existing pipelines.

So, while it is likely that the city will embrace trenchless technology for maintaining existing pipes, the city will probably keep using traditional trenching for installing new pipelines and connections.